03 May 2013
Two S6 pupils invited to the Scottish Parliament

Kirsty Smith and Emily Murdoch were invited to the Scottish Parliament reception hosted by the Lessons from Auschwitz project along with Ms Kinney.  They were chosen as a result of their effort in raising awareness of the Holocaust by creating and organising workshops for S2 TRA pupils.  The girls also designed and arranged the printing of wrist bands to raise awareness and help fundraise for the charity.  The LfA organisers were so impressed with this idea that they plan to produce similar wrist bands themselves in future years.  Kirsty and Emily had a lovely evening meeting Holocaust survivors, young people from the project and Alex Salmond who was also present. 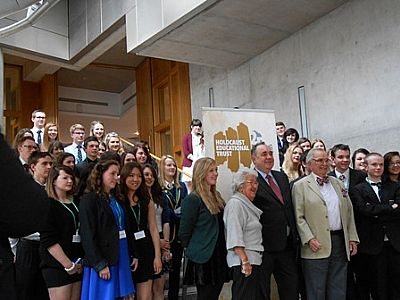