On the 19th June, we attended the National YPI event in Perth after winning the Youth Philanthropy Initiative final back in January this year. There were all the winning groups from 80 schools there on the day from all over Scotland. We five girls were just one group out of six others from all 80 that were asked to perform in front of over 700 people to explain the work we have done since winning the £3000 for our chosen charity HUG – Action for Mental Health. We were told we delivered our speech very well although we all felt extremely nervous before hand but once we got going we were fine. We explained to the audience how we have managed to raise so much awareness and continue to do so and raise more funding for them. We also told them about how we are creating plans to set up our very own Junior HUG for the Tain area. After this we sang our song that we were told helped us win the final which we had customised ourselves to relate to HUG and the work they do. We were complemented lots throughout the lunch break by others. Our rector, Mr Macleod told the audience what impact the project has had on the school and Mr Calum Macsween, Head of Education in Highland, spoke about how it has made a difference throughout the region. We all had an amazing time and enjoyed ourselves thoroughly and hearing and meeting the other groups was great. To make it even better, we got the opportunity to listen to singer Sandi Thom and hear a speech from Olympian Katherine Granger who we even managed to meet and get a photo with! The next event we have to look forward to is our trip to Newcastle in August to figure out what our plans are for Junior HUG. We will be getting ideas off another group just like us to get a starting point in which we will extend when we return and have our big meeting back home afterwards.
By Hannah Wilkie - member of team HUG along with Gemma Paterson, Rebecca Murray, Megan Urquhart and Lauren Ubych 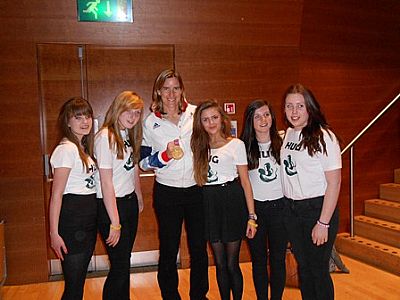