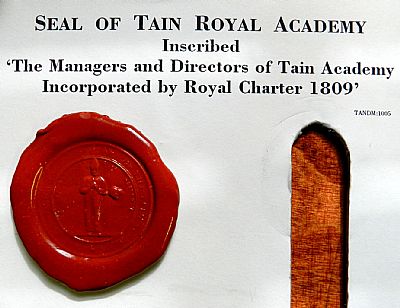 Although most of the prospectus looks to the future, it is only right that we acknowledge our debt to the past.

As you might expect in a town with a long ecclesiastical history, Tain has been an important educational centre for many centuries.  There are references, for example, to an “old” schoolhouse adjacent to the Collegiate Church of St Duthus in the late 16th century.

Tain Royal Academy owes its origins to a meeting in Richardson’s Coffee House in London on June 6th 1800 when a number of “noblemen and gentlemen” resolved to establish an Academy in their home area.   Funds were raised and a Royal Charter was granted in 1809 establishing the right to build the first Academy on the Scottish mainland north of Inverness.   A rector and an assistant were charged with the teaching of “reading and writing the English language, grammatically and correctly, the Latin and Greek languages to such as require it, Arithmetic, Book-keeping, Algebra, Geometry, Navigation, and the elements of Fortification and Gunnery.”   By the time the school opened in 1813 the staff had doubled to four and the curriculum had extended to include natural philosophy, mathematics, geography, drawing, French language, history and elocution.   The school ran into financial difficulties in the 1840s but a public appeal was launched with subscriptions payable in locations as far apart as Jamaica and Bombay and TRA survived this setback to flourish once again.

Other schools existed in Tain during the 19th century but after the 1872 Education Act only TRA and the Parochial School (now Knockbreck Primary School) survived.  TRA continued as a fee-paying school run by directors until the 1918 Education ACT when it was taken over by Ross and Cromarty County Council.   In 1937 both local schools united.

By the time Rev Robert Begg compiled an entry for the Third Statistical Account in the 1950’s it was evident that there was considerable dissatisfaction with the state of the buildings, the over-crowded classrooms “and, most lamentable of all, a total lack of playing fields”.   Rev Begg noted that a site for a new school had been identified on the Burgage Farm between Scotsburn Road and Hartfield Road but added, “When it will materialise no man knows.”

A new school did materialise in the next decade and was opened in 1969 with an extension added in 1978 as the school roll rose to 840.   The school is determined to maintain the excellence which has always been the hallmark of Tain Royal Academy